Crescent Petroleum’s Gulf-South Asia Gas Project (GUSA) was the first workable conceptual study for producing, transmitting by pipeline and delivering natural gas from Qatar to Pakistan and eventually to other parts of the Indian subcontinent.

The GUSA Project comprised two main parts, each representing a world class project on its own, viz the Upstream Development to produce the gas at the source, and the Pipeline, which was to transport the gas 1186 kilometers to Pakistan.

Crescent Petroleum was the developer and lead sponsor for this project. The Company has successfully advanced the GUSA Project to a state of pre-implementation maturity including completing a detailed route survey for the whole pipeline route from source in Qatar to its final destination in Pakistan before the project was eventually aborted due to political constraints.

The upstream part of the GUSA Project included the development of a sector of the North Field of Qatar to produce natural gas for export to the Pakistan markets.

Crescent Petroleum expended more than US $30 million on the development scheme of the GUSA Project before it was aborted. The engineering design of the pipeline was completed. The routing of the pipeline was based on a detailed onshore and offshore route survey undertaken and completed by Fugro International for the Company.

The GUSA Project carried enormous environmental benefits, regionally and globally, which would have ensued when the natural gas replaced the large quantity of fuel oil that is used in Pakistan at burner tips. 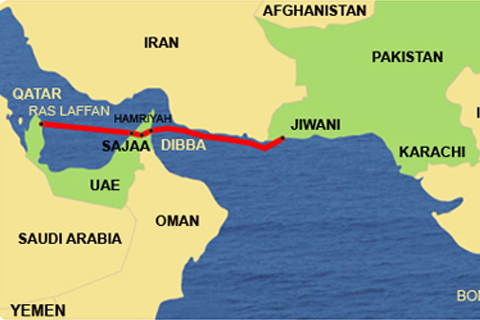