Majid Jafar: “Shale oil & gas revolution in America is positive for our region; oil prices not low by historical standards” 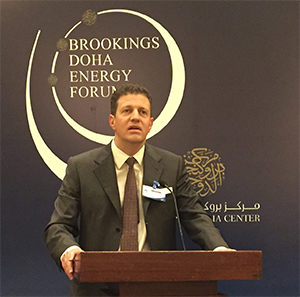 Majid Jafar, CEO of Crescent Petroleum and Vice-Chairman of the Crescent Group. The CEO of the Middle East’s oldest private oil & Gas Company has called upon the region to take advantage of lower oil prices to reform the sector and enhance competitiveness. Speaking to more than 140 experts from 20 countries at the Brookings Doha Energy Forum on a Plenary Session entitled “The Political Economy in the Middle East and Asia”, Majid Jafar, CEO of Crescent Petroleum and Vice-Chairman of the Crescent Group, highlighted that global oil prices were more likely to be affected by the supply situation in the United States and the demand growth in China, than by geopolitical events in the Middle East. He also stressed that due to regional instability and insufficient policies to maximize investment, the region’s full potential in oil & gas production was still not being realized: “Instability in our region, combined with insufficient oil investment policies in many countries, has meant that we have been losing market share to North America and other parts of the world, even though the cost of production in our region is by far the lowest. We should now take advantage of these lower oil prices now to reform and strengthen our energy sector by tackling energy subsidies, ensuring more efficient consumption, and implementing policies to enhance private sector investment and competitiveness in our industry.” The Brookings Doha Energy Forum is being held on 25th & 26th March, 2015 entitled: “Energy Stability - How Changes in Geopolitics and Markets Alter the Energy Landscape”, and featured keynote speakers including the Energy Ministers of Qatar and Morocco and the US State Department Special Envoy for Energy, the Secretary General of the Gas Exporting Countries Forum, as well as leading oil company executives and energy experts from Europe, Asia, and America, who discussed the latest developments in global energy markets and industry trends. “I believe the shale oil & gas revolution of the United States was a positive development for our region since it confirmed the importance of oil & gas for the future and half the world’s resources of oil & gas are in the Middle East region,” Jafar added in his speech to the Forum, further highlighting the role of natural gas in reducing carbon emissions and tackling climate change: “By reducing dependence on coal and increasing natural gas use the United States now has the lowest carbon emissions in over 20 years, and this lesson should be applied in other large economies like China, India and Germany where coal burning has been increasing. I truly believe that natural gas is the fuel of the 21st century, and the Middle East region can play a larger role than it is today – with almost half the world’s reserves but still less than 16% of the exports currently.” Regarding the fall in oil prices Jafar pointed out that although the speed of the fall in oil prices last year was very rapid, with oil prices halving in less than 6 months, in fact the current level now is not so low by historical standards – since oil prices were as low as $12 per barrel only 15 years ago. “The problems in our region are not below the ground such as technical cost of production or availability of reserves, but actually above the ground such as outdated policies, slow decision making, too much dependence on the government to manage projects, and of course political instability. But I firmly believe if we can tackle these issues in a determined manner, then our region will continue to be the most competitive energy provider for the world market for decades to come,” he added.
error: