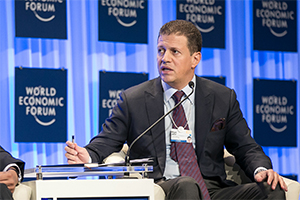 Majid Jafar, CEO of Crescent Petroleum and Vice-Chairman of the Crescent Group. 20th January 2015, Davos – Majid Jafar, CEO of Crescent Petroleum, calls for leaders at this year’s Annual Meeting of the World Economic Forum in Davos to put economic stability in the Middle East on top of the agenda. Over 40 heads of state and government, as well as 2,500 other leaders from business and society are convening at the 45th World Economic Forum Annual Meeting, from 21 to 24 January 2015 in Davos-Klosters, Switzerland, to discuss The New Global Context. Speaking on the “Arab World Context” session on the first morning of the Davos Summit, Majid Jafar, who is Vice-Chairman of the Crescent Group and a member of the Global Agenda Council for the Middle East North Africa (MENA) region at the World Economic Forum, highlighted the problem of youth unemployment in the wider region, which is the highest and fastest growing in the world, with an average of over 30% of young people without a job according to World Bank figures: “The turmoil of the so-called Arab Spring has led to a decline in investment, and many economies in the region are not experiencing growth. In parallel with all the political efforts, we need quick and urgent economic action to address the issue of high youth unemployment in the region. Insufficient economic growth in the region has led to massive youth unemployment, in some areas more than 60%. This is turning into a long-term demographic and economic crisis.” “The recent fall in the oil price is also a warning that the region cannot be over-reliant on energy resources for GDP growth. We must create long-term sustainable economic growth. Employing our youth is the key to unlocking our true natural resource. We cannot achieve political stability without economic stability,” he adds. Jafar’s comments are backed up by the annual World Economic Forum Outlook on the Global Agenda 2014 Report, which cites persistent youth unemployment as the number one challenge for the region in the year to come, ahead of managing political transitions and societal tensions. High levels of youth unemployment and a mismatch between education and the skills required by employers have led to a vicious circle, where economies stagnate and there is an over-reliance on extractive industries and state sector jobs. One scheme that Jafar suggests could tackle the high youth unemployment in the region is the Arab Stabilization Plan (ASP). The ASP is a policy initiative for a regional framework to promote infrastructure investment and create jobs. The proposal, which takes its inspiration from the US-led Marshal Plan to re-build post-war Europe, would prioritise infrastructure projects and boost economic growth in countries such as Egypt, Jordan, Yemen, and Tunisia. Investment would come mainly from within the Arab world such as the Gulf countries, and the private sector. “The MENA Region is currently going through changes that are unprecedented in the last century. In many countries there has been a failure to build national identities let alone a regional one, a failure to build inclusive and stable institutions, and above all a failure to build private-sector driven competitive economies. There is capital in the region, but there is a need for a focused multinational effort to create regional economic confidence and direct it into long-term infrastructure investments. This will create employment and sustain economic competitiveness,” Majid Jafar concludes.
error: