The Concession & Work to Date

On the 23rd of February 2008, the Ruler of Sharjah and its dependencies, His Highness Dr. Sheikh Sultan bin Mohammed Al Qasimi and Crescent Petroleum signed a concession agreement to explore the Sharjah block covering approximately 12 of acreage south and east of the condensate fields. The location of the exploration block is shown below in yellow.

Immediately following the award of the Concession, Crescent Petroleum contracted  WesternGeco to acquire new 2D seismic data.  The acquisition of the seismic data was completed in late 2008 where the local topography presented significant challenges as shown in the following figure.

The processing of the data was completed by WesternGeco in early 2009 and initially several leads were identified with significant potential recoverable volumes in line with the existing onshore gas condensate field sizes of the Northern Emirates.

This is a highly prospective block which is surrounded by mature, producing fields as shown in the following figure. The project involves the drilling of two exploration wells.

The geological history of the UAE has been favorable to hydrocarbon exploration with significant discoveries of a number of giant oil/gas fields in the thrusted anticlines. The majority of these oil fields are in the Lower Cretaceous age rocks of the Thamama carbonates. The stratigraphy of the Sharjah Onshore block shows that from surface to Nahr Umr the rocks are predominantly marls, shales and argillaceous limestone of the Aruma, Pabdeh and Fars groups, while in the eastern part of the Sharjah Thamama reservoir lies below allochthonous sediments. The major reservoir rocks of the Thamama carbonates lie below the Nahr Umr which is the regional top seal for the Thamama reservoir.

The Thamama Group was deposited in shallow water open shelf to lagoonal environments on a carbonate ramp is the primary reservoir objective of the Onshore Sharjah concession. The average thickness of Thamama in the region is 2700 feet.. The prolific Shuaiba has an average porosity of 10% and a maximum porosity of 20% with an average thickness of 220 feet. Fracturing has contributed to both porosity and permeability and is sometimes the primary flow conduit within reservoirs.

Gas-condensate is seen along the Sajaa-Margham thrust as far north as the Bukha field (66miles) and south to Khusub-1 (50 miles).

To date, only two wells have been drilled in this extensive acreage of 1243 sq km and neither of these wells has penetrated the Thamama formation. In addition to the primary objective of the Lower Cretaceous Thamama, there are secondary objectives of the Upper Cretaceous reservoirs of the Qahlah and Simsima formations. Two exploration wells have flowed black oil of 37° API from the sandy facies of Aruma, i.e. the Qahlah formation.

This concession area is surrounded by four mature gas-condensate fields.

The Sharjah onshore concession is covered with 2D seismic surveys of different vintage which was acquired between 1970-1993. Generally seismic data quality was poor and was not suitable for making a map of deeper horizons. To infill the pre-existing grid to enable better definition of the exploration potential of the acreage, 545 km of 2D seismic data over 34 lines was acquired as shown in the figure above using  WesternGeco Q-Land MAS technology which enabled better definition of  its exploration potential.

The seismic data was processed and reprocessed by different vendors. Final processing on selected lines was  carried out  by Calgary based Thrust Belt Imaging company (TBI) which improved the overall  imaging quality of the seismic data of the deeper horizons over the leads. Crescent has completed interpretation of the Thamama horizon and has identified several leads and prospects with significant potential volumes.

Crescent Petroleum and Rosneft Oil Company, Russia’s largest oil and gas company, jointly signed a farm-out agreement in June 2010, under which both Companies will work together to develop the Sharjah Onshore Concession. The Farm-Out Agreement follows the ground-breaking Strategic Cooperation Agreement between Rosneft and Crescent Petroleum which was signed on 19th May 2010 to jointly develop material oil and gas opportunities in the Middle East and North Africa region.

Rosneft receives a 49% of the Participating Interest in the Concession, with Crescent Petroleum holding the remaining 51%. The current agreed investment plan of approximately AED 220 Million (USD 60 million) will go principally towards initial exploration activities including the drilling of two wells to an approximate depth of 14,800 feet. G&G work is in progress to identify the second well location. 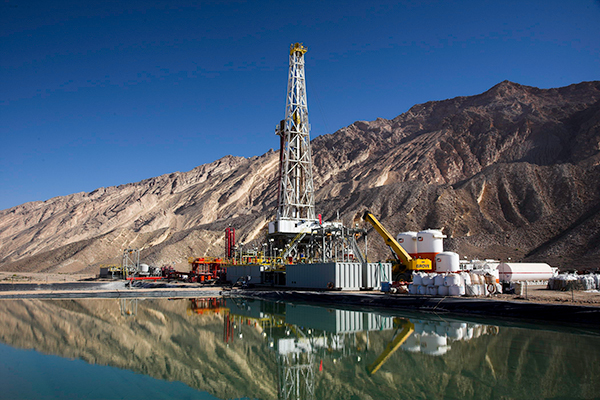