The Island of Sir Abu Nu’ayr, which sits in the centre of the concession area, is part of the Emirate of Sharjah and is located 80 kilometres offshore of Abu Dhabi, in the middle of the prolific offshore oil territory. The acreage is flanked to the east by Dubai’s Fateh oil field complex, to the north by the Sirri oil field of Iran and to the west by the prolific oil and gas fields of Abu Dhabi.

Sir Abu Nu’ayr is a salt-piercement structure formed by the movement of Cambrian (Hormuz) salt. Salt deposited of Cambrian age has moved progressively upward, puncturing through the younger overlying strata to create a dome structure. Surface expressions are composed of evaporites rocks, plus igneous rocks and quartzitic sandstone. Such deep seated salt movement has affected all the major highly prolific reservoirs (Khuff, Arab, Ilam/Mishrif and Thamama) of the giant Abu Dhabi fields (Zakum, Umm Shaif, Bab and Abu Hasa) and generated potential highly dipping structures around the flanks of the piercement structure.

A 2D seismic acquisition was carried out in 1999. The acquisition geometry, processing and interpretation of the dataset have been considered a remarkable success case. The forward work program is underway to undertake a 3D seismic survey, using the most up-to-date seismic techniques to image under the Island and to determine the structural configuration of the salt and formations adjacent to the Island. This will lead to subsequent exploration drilling.

Crescent Petroleum’s expertise in this technology significantly reduces the exploration risk associated with salt piercement plays. Geologically, the main reservoir intervals are most likely to be the prolific Ilam/Mishrif and Thamama formations of the Cretaceous age and Kuff formation of the Permian age. These reservoirs comprise shallow marine carbonates having excellent reservoir properties, as evidenced by the many world-class and giant oil fields in the immediate region.

A comprehensive 3D/2D survey design study was conducted during 2008 using Raytrace modeling for all target reservoirs and encompassing the island plus the entire 12 Nautical Miles concession area. A further study in 2009 developed the play concepts of the salt related structures based on the available data. 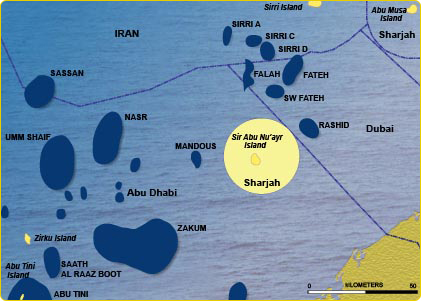